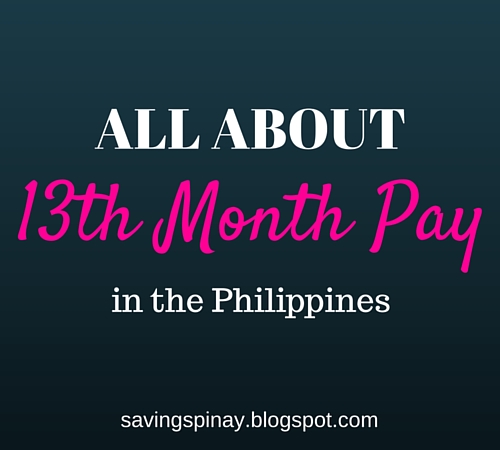 To start the week, we will be talking about 13th Month Pay in the Philippines. I hope as you read this post you already received your 13th month pay and who known maybe your company even give you a 14th, 15th and even 16th month pay. Lucky you.

For those who, like me, still haven’t received their 13th Month then I don’t lose hope. Nagsisimula pa lang ang December. For sure you’ll receive yours soon.
I was able to post All About Paluwagan, All About Five-Six and All About Philhealth and All About Banking HERE and HERE over the past so today since this will be the trending topic of all employees this month of December, I will be giving a complete guide on 13th Month Pay. From explaining what it is, how it is computed to answering some of the frequently asked questions for your reference.
If you find this post helpful then I encourage you to share the link to others especially on your Facebook, Twitter and Instagram.
Let’s begin!
The 13th Month Pay Law
Presidential Decree 851 amended by Memorandum Order Number 28 was known as the 13th Month Law. It was passed in 1975 which enabled the labor force to celebrate the Christmas and New Year better with additional monetary benefit from their employers.
Under Section 1 of the 13 Month Pay Law, all employers are required to pay their workers who receive a basic salary of not more than 1,000pesos a month, regardless of nature of their employment, position, designation and employment status, a 13th-month pay not later than December 24 of every year. This means whether you are a contract worker and/or under probation you are entitled for a 13th month pay. However, you need to spend at least one month during the calendar year to be included.
Definition of Terms
13th Month Pay is one twelfth of the basic salary of an employee within the calendar year
Basic Salary includes the earnings paid by an employer to an employee for services rendered but may not include the cost-of-living allowances, monetary benefits which are not part of the employee’s regular pay.
The 13th Month Pay Computation
Now how do you compute for your 13th month pay? The computation is mostly done by the HR or the Accounting Department but if you wanted to know how much you’ll receive on a personal lever then you can easily compute for your 13th Month.

13th Month Pay is equivalent to 1/12 of the total basic salary earned by the employee within the calendar year.

The simple formula is

(Basic SALARY  x Number of MONTHS worked in the current year) divided by 12.

This means Juan will be receiving 9,750pesos as his 13th Month Pay.

The 13 Month Pay Exception on Employers
Now, employers who falls in the following situation are excepted in paying the 13th Month pay
1. Employers who are already paying their employees a 13th month pay or more in a calendar year like bonus, mid-year bonus, profit-sharing payments and other cash bonuses.
2. Government and any of its political subdivision except those corporations operating as private subsidiaries of the government. 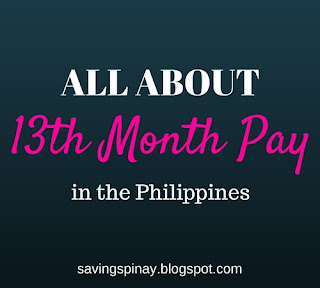 3. Employers of household helpers and/or persons in the personal service of another in relation to such workers.
4. Employers who are paid on purely commission, boundary, task basis and those who are paid by a fixed amount for performing a specific task work.
13th Month Pay Tax Exception Bill
The Republic Act No. 10653 is an act adjusting the tax exemption on bonuses or the 13th month pay received by employees from their employers from 30,000pesos to 82,000pesos.
What does this mean?
If your computed 13th month pay is lower than 82,000pesos then it is not taxable. You will receive your 13th Month Pay as is to the computation. Before the adjustment, the ceiling for this is 30,000pesos so it is one of the most important bill happened this 2015 that is pro- employees.
13th Month Pay for Different Types of Employees
If you are a New Employee,
If you are a new employee, you are entitled for a 13th Month Pay as long as you spent one month of service to your current company.

If you are a Resigned Employee,
If you are a resigned Employees or those who separated during the calendar year are entitled to 13th Month Pay in proportion to the length of time worked during year year. The employee is also considered as a new employee for his/her new job so the rule for New Employees will also apply.
Pedro resigned three months ago in a job where he is paid 15,000pesos. He spent a total of 9 months of service before resigning.

If you are have Multiple Employers,
If you have multiple employers, you are entitled with 13th Month Pay from all of your private employees. However, if you are a government employee and works part-time to a private company, you will only receive a 13th pay from your private employer.
If you are on a Maternity Leave,
The two months you spent on maternity leave will not be included in the computation of your 13th Month Pay since this is deemed not part of your basic salary and period spent on your service.
Pedro’s wife Maria receives 13,000pesos and spent 5 months before filing for maternity leave. Since she is on maternity leave she will still receive two-month worth of salary however the computation of 13th Month Rule will only be 5 months.

To compare if she is not in Maternity Leave and spent 7 months during the calendar year,

Remember:
1. 13th Month Pay is mandated by law. Your employer can be sued for non-compliance.
2. 13th Month Pay shall be given on/before December 24.
3. Whether you are new employee, resigned and/or have multiple employers, you are entitled for your right to a 13th Month Pay
4. Employers who are giving an equivalent of 13th month pay already, nature of business is under government and its political subdivision, has personal relationship with its worker or employer of household helper or paid on purely commission, boundary, task basis are excepted to the 13th Month Pay Law.
5. Christmas Bonus is completely different than the 13th Month Pay Christmas Bonus is not mandated by law and not a responsibility of the employer. Nasa employer kung magbibigay siya ng bonus.
I hope this post helped you.
If you have questions regarding 13th Month Pay and I might be of help then don’t forget to comment below.
I hope you liked this post. Don’t forget to do any of the following:
Advertisements
Loading...

As always the online community is very generous when it comes to income-generating ideas and I am a living proof that you can really make extra money online. READ: My Year-End Extra Income Report Today’s post is a continuation on the series of articles that discuss how to make money online. If you want to learn…

Your Money or Your Life is one of the financial book I finished for 2020.   The book introduced me to a 9-step plan to financial independence which I soon will write a separate blog post.   One of the best part I read in the book is a list of 101 sure ways to…

Banks offering online banking is one of the best that ever happened in our society. I often tell this on my blog posts how much I love how BPI created one of the first online banking system that lets cashless banking possible and for this week I will be focusing on Metrobank. I got my…

If you remember last year I became open on how I have some 20-something panics. I became very worried on certain parts of my life. I guess this is about the whole “responsibilities” sinking in for I am now earning my own money and making some decisions that could possibly change my life in the…

Today’s post is a rather short and timely.   I have posted seasonal money tips in the past but usually involving Christmas but I thought it will be nice to share something for my readers who are celebrating Valentine’s Day but don’t want to spend a lot of money. Be Realistic with How Much…

This blog post is very timely especially since it is the marching period. I hope before reading the rest of this post you have already checked out my timeless tips for new graduates HERE and HERE. Today we will be talking about job search and specifically in the Philippines. From How to Find a Job,…